In my heyday joint stirred up lots of images: being locked up in jail, using the toilet, and yes of course...the long weed thing that one could illegally smoke.

I am surely dating myself with this information but I am proud to be who I am. I look forward to growing older and wiser....wiser being the main focus of my thoughts hence forward.

This post and hopefully more in the future will focus on my joints. Those bony things that ra just loves to devour at times. I think it is important to share my joints because often I wonder if I am alone in this ever continuous attack on my body and in particular on my joints and now tendons. And, I remember early on wanting to have comparisons to look at when I was traveling this ra road. It is true that we know many search engines that can pull up pictures but I have yet to find any resource that details one person's joints from head to toe with ra. This is my intent.

This little joint is not suppose to be attacked by ra. Ummmmm....I differ in this opinion. First of all it has been attacked since the onset of my illness and second, this particular joint has been given a fancy name for its battle which is supposedly non ra related. 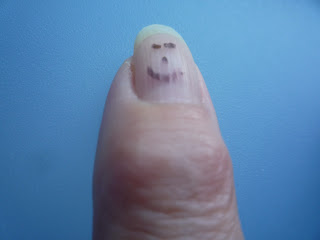 The joint I am referring to is the distal interphalangeal joint. Whewww...what a mouthful :-) This particular little happy camper is located on my right pointer finger (I am so technical).   The ASSH (American Society for Surgery of the Hand) site is a source I recommend you can use with if you plan on having ANY hand surgery at all! 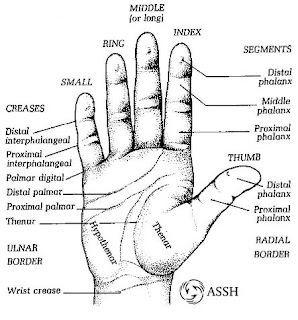 And so this little joint has been battling this war for 14 plus years and has had a crown name of it's own. In fact, 8 of these joints out of 10 are in on the war. Medicine Net describes this phenomenon quite nicely...

"A very common early sign of osteoarthritis is a knobby bony deformity at the smallest joint of the end of the fingers. This is referred to as a Heberden's node, named after a very famous British doctor. The bony deformity is a result of the bone spurs from the osteoarthritis in that joint. Another common bony knob (node) occurs at the middle joint of the fingers in many patients with osteoarthritis and is called a Bouchard's node. Dr. Bouchard was a famous French doctor who also studied arthritis patients at the turn of the last century. The Heberden's and Bouchard's nodes may not be painful, but they are often associated with limitation of motion of the joint. The characteristic appearances of these finger nodes can be helpful in diagnosing osteoarthritis."


I have been blessed with both! Whohooo! And let me tell you, they are painful. I am doing the node dance right now. But I still beg to differ on exactly what these nodes are! In all scientific reports they are labeled under the term osteoarthritis. But I ask, why in the world would these appear in early onset ra? Could it be that so often ra is divided up into nice little compartments under other illnesses names? And perhaps, doesn't this then divert the exact cause of all these illnesses and thus the severity of damage ra can inflict? But alas, that is something that needs to be put into a book not on an itty bitty post here.


But I will give my two cents of guess work here....perhaps because I was deficient in Vitamin D, this contributed to these nodes. Mmmmmm....Murphy's scientific data collection at work here. Common sense that is. Unfortunately vitamin d deficiency was not known until rather recently in autoimmune illnesses. And perhaps had I been tested much earlier in my disease activity, some of the impacts of ra might have been mitigated. Can't say for sure but is an interesting thought for me to ponder.


And so I leave this post with one thought for you...Have I had my vitamin D and calcium levels tested lately? If not, please do so. 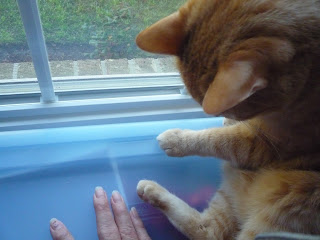 So true about the vitamin D. Having spent most of my life in the North, I can attest to being very deficient with my D.

My motto...every little bit helps, so if finding out if one is lacking in vit D will help...then maybe that will give one's body a little extra fuel to win over the ra :-)

My rheumatologist seems to go with the majority on this one. When I mentioned the pain and stiffness in that last tiny joint in my fingers, he said that it had to be osteoarthritis I was experiencing there, because RA doesn't affect that joint. It attacks ALL the other joints in the hand, but not that one. I accepted his pronouncement, but it struck me as rather whimsical. Why in the world would the rheuma-dragon be so choosy?

He also tells me that RA rarely affects the hip joints, but I've read several blogs in which the writer had a hip (or hips) replaced because RA destroyed the joint. Hmmm. Go figure.

Yep, that joint on my pointer fingers was the first sign.

The first joint to hurt and be red and swollen and have a matching mate on the other hand. Seems that RA has to be mirrored on both sides of the body to warrant its name.

I think the docs are waco - if it's inflamed and it's sore and it's red and it's hot - it's part of this dastardly auto-immune disease, and deserves the name RA.

Wren...docs only mimic what is known about ra....unfortunately. I truly believe alot more goes on with ra and the docs are only seeing the symptoms of the disease and don't fully understand the process of ra...yet. I have hope though :-)

Susan...typical ra is symmetrical but mine was not symmetrical at all. I am just now getting it alot on my left side of my body entirely. Again, I find ra to be so individual and so much still is yet known about this disease or autoimmune diseases overall in my humble opinion. And yup...red and hot...ain't no lady.

I guess I am lucky that my doc believes me when I have the most godawful pain in that joint in a few of my fingers. I know it is RA. It flares up and then disappears for no reason. My feeling with docs is that they only know what they know today. Tomorrow they will know more and the next day more.

Same issues here! The joints below my thumbs as well as my hips, and of course, they say it's osteoarthritis...even though I have RA. And NOT symmetrical! The only consolation for me is that I have multiple autoimmune diseases so I know I am getting the correct treatment either way. I cannot imagine how frustrating it is if you are not getting the correct treatments. Good, common sense doctors are so hard to find...especially when it comes to rheumatologists!

Ooh- I know that poor joint! For me it's the index finger of my left hand and it's terribly painful at times. I am slightly annoyed that if I have pain in one joint but not the same joint on the other side of the body it seems to get waved off as "just OA" and not much is done about it (I have a new doctor, now!).

I was on calcium+D supplements for several years before my RA diagnosis, and now take additional D3 and Niacin supplements to help handle inflammation. It does seem to help!

Adrienne...so agree with you. Now, if we could just empower them with a cure for ra :-) Wouldn't that be some powerful knowledge.

Theresa...like you, I was never symmetrical. I feel blessed for this because at least I had one half way decent side to lean on. Course being a right handed lady, having a left hand that worked did make life more interesting.

Redefininggood...never heard of the niacin supplement. I will have to read up on that one. I am glad your combo seems to be helping you. Sometimes I swear we are like a pot of soup...we all have different ingredients to make us just right.

Hi! I really like your blog-would you mind if I added your link over in my neighborhood?

Deb, when my hands were x-rayed the first time, the damage that actually showed up was the first joint on my right ring finger. Rheum said that was not a usual joint, but it was actually a little crooked (ra-like), so pronounced it ra damage. Funny--b/c I don't remember that finger ever hurting, but the evidence is there. It now has a little bump on it as well. The rest of my joints hurt like crazy but that one never has.
Sherry

I've had pain in those little joints from the get go and at the age of 30, I doubt it was sudden onset of OA!