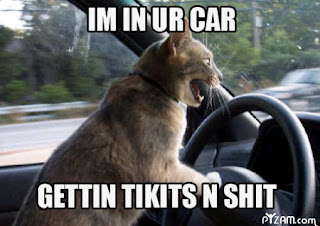 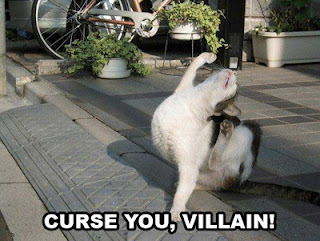 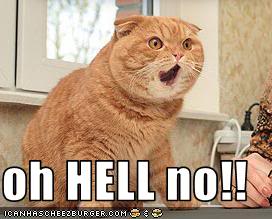 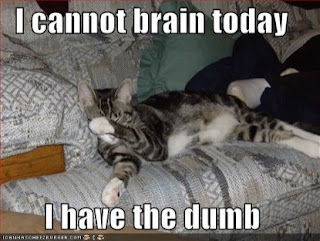 And by the way, cuzing for me only relieves stress when done by a cute fluffy kitty :-)
Posted by Deb aka AbcsOfra at 7:03 AM

If it helps any, we dropped everything down to liability on my wife's car (a 2001) in October and in December it got ran into at the grocery store. Of course they didn't wait for her, leave a message nor were there any witnesses. Maybe if we changed the insurance back, leave the keys in the car and get one of those flashing arrow signs that points to her car and syas "Steal Me". Nah ... just an idea.

Tharr...I just hope the damage wasn't too extensive on your wife's car. I am waiting on our mechanic to come up with a figure on fixing small blue (my nickname for my car). Problem is...blue book value is low on this our car but we only had 59K miles on her. The cost of used cars are thru the roof right now so I am leaning on fixing her and keeping her for me and getting a new vehicle (cheaper one) for my daughter to drive. What is wrong with people any more in this world?

Theresa...Thank you so much! I'll take all the prayers I can get :-)

Please don't hate me but I am sitting here laughing so hard. Not because of what happened to you but because this blog entry was do funny between your honesty and hysterical photos. The "Snatchum" company almost did me in and now my belly hurts.

In all seriousness though, I am sorry this all happened to you and I hope things settle down quickly!

Christine....well you and I surely have the same sense of humor. When the police were here and I was calling our road side assistance service company and they told me the name...I actually looked around and said, "I must be getting punked!" Wasn't so but I did start laughing so hard I almost had tears coming down my eyes. The police looked at me a little worried until I repeated the tow service name. And I figure we all might as well get a laugh out of this, even if it will probably be over a $3,000 dollar laugh (at the minimum).

Deb, I am so sorry that this happened to you. I am in the same place with Murphy’s Law. I really wish Murphy would just leave us alone. Go ahead and cuss- I am not complaining – I am joining in. :-)

It does seem that just when we don't think we can handle one more thing going wrong, something totally unexpected happens - again.

Somehow, we survive. Hang in there. A year from now, it will be forgotten...and something else we go wrong...

But your amazing sense of humor will carry you through!

Poor thing! I feel for you. Those stupid partners that don't listen to us. They never learn. Don't they know to listen to us! I hope it all works out for you. Be sure to give us an update.

Lana...we can have a cuzzing party together :-) Still getting all the numbers back on what it will cost to fix our little car.

Susan...I am calling in someone to dehex my life :-) Sprinkle lots of fairy dust on me and anything I can think of to remove all the bad mojo.

Adrienne...I will not comment on my partner right now....grrrrrr is all I can say. Taking deep breath to reduce the stress.