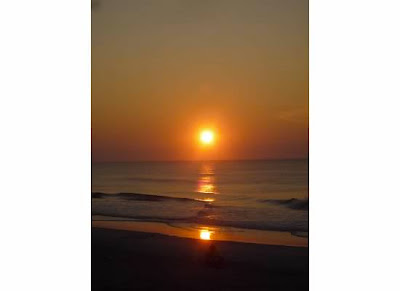 I think these past few years and all my close family members passing has just taken its toll on me. I will try to stay grounded on the beach for awhile and I will try to tend my life but I will always (and I mean always) have my eye on the far horizon…wondering if the rip tide will get me again.
Posted by Deb aka AbcsOfra at 2:54 AM

Aw, Deb, I'm so sorry. I've missed you here in the blogosphere and hoped it wasn't because you were too ill to post. Now I know you weren't, but your dear brother was. What a terrible blow.

My heart goes out to you as you walk the hurricane-changed beach. Sending you comfort and calm and peace of mine from my heart to yours.

Your comment means so much to me. I wanted to blog during it all but had no access to a computer up north where I was staying for over a month. I truly thought I was a strong person and I know that I am but for some reason I am changed from it all. Not in a bad way but definatlely chaned. Bless your heart!

I am so sorry for the loss of your brother. A loss is devastating and make sure it does not take that much of a toll on your health as well. I would often wonder where you were and I had you in my thoughts. I missed your insight and healing words. Now, you need ours. Please let me know how I can help.

So very sorry... You did describe, so beautifully, the maelstrom we are caught in during a life changing event. I hope you experiences some calm and some peace.

AlotheA...thank you from the bottom of my heart. And yes, these types of changes do impact our health. I can attest to that for sure. But I was so glad I got to see him before he passed and we were able to share some time together once again.

Joan...Sometimes I can't help but feel that "it" is always there lurking somewhere. "It" being that something bad will happen. I still haven't shaken that feeling yet but keep fighting it every day. Thank you for your kind thoughts of calm and peace.

I'm sorry to hear about the loss of your brother. By living in the moment, you continue to not only do yourself a favor, but you also continue to keep his memories and his presence alive.

Aviva and RA Guy...thank you both so much. Our family has lost three very close people in the past two years and it has been very tough. The only one that maybe one might expect was my Mom but the other two...well they were just way to young and it came out of the blue. And yes, if I can do good deeds and live in the moment I really believe I am helping them on the "ohter side" somehow. And it is the only thing I have to hold onto...so it is a win win I suppose. Thanks again to both of you so much.

These losses shake us at our core - the very ground we stand on seems untrustworthy. If this can happen, then... seems to permeate our every thought.
Time is a great healer, true. But the scar remains. Reminding us of our loss, yet bringing us to a place that is now stronger than before. I hope and pray for that place for you, my friend. A place of trust, a place of peace. Be gentle with yourself along the way -
Theresa

Theresa...no truer words of wisdom can be said. And yes, I suspect that in time I will once again find peace and trust. But I also realize that we just never know when it may be our time and therfore I am more determined then ever to live every moment to the best of my abilities. Thank you so much for your kindness.

So sorry to hear of your loss. I can't imagine what you have been going through. My thoughts are with you.

What a heartfelt tribute to your brother. My condolences for your loss. May you find peace in this additional trial.

I am so sorry to hear this. Words can't really express. I was about to write "I hope you ..." then ... I couldn't think of the proper words. I haven't had a sibling die. I've lost both my parents (Mom, 2 years ago, I continue to grieve and sometimes still say it's unbelievable, guess I thought she'd never die?) and many relatives. First cousins, and almost all Aunts/Uncles. Yet, I can't imagine your pain. May you be blessed with the strength to "live in the moment" always.

Bless your hearts....Adrienne, Believe & Do, and Anne. Your sweet thoughts and support mean so much and I just want to say thank you from the bottom of my heart.

Oh dear, I am so sorry. I am just now catching up on blogs, so I apologize that this note is so late. We learn the most from the best people, both from their living and their passing. My heart goes out to you and your family.

So sorry to hear about your brother. I kno how much u loved him.